Woman with a Parasol

With Manet’s assistance, Monet found lodging in suburban Argenteuil in late 1871, a move that initiated one of the most fertile phases of his career. Impressionism evolved in the late 1860s from a desire to create full–scale, multi–figure depictions of ordinary people in casual outdoor situations. At its purest, impressionism was attuned to landscape painting, a subject Monet favored. In Woman with a Parasol – Madame Monet and Her Son, his skill as a figure painter is equally evident. Contrary to the artificial conventions of academic portraiture, Monet delineated the features of his sitters as freely as their surroundings. The spontaneity and naturalness of the resulting image were praised when it appeared in the second impressionist exhibition in 1876.

Woman with a Parasol was painted outdoors, probably in a single session of several hours’ duration. The artist intended the work to convey the feeling of a casual family outing rather than a formal portrait, and used pose and placement to suggest that his wife and son interrupted their stroll while he captured their likenesses. The brevity of the moment portrayed here is conveyed by a repertory of animated brushstrokes of vibrant color, hallmarks of the style Monet was instrumental in forming. Bright sunlight shines from behind Camille to whiten the top of her parasol and the flowing cloth at her back, while colored reflections from the wildflowers below touch her front with yellow. 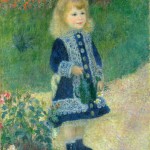 NEWERA Girl with a Watering Can

OLDERMasked Ball at the Opera