Masked Ball at the Opera

Manet came from a well–to–do family, and this painting provides a glimpse of the sophisticated Parisian world he loved. He was uncomfortable in the countryside, preferring instead the finery of the city. These elegant men and coquettish young women are attending a masked ball held each year during Lent. “Imagine,” ran a description in the newspaper Figaro, “the opera house packed to the rafters, the boxes furnished out with all the pretty showgirls of Paris….” There is little doubt about the risqué nature of the evening, where masked young women, likely respectable ladies concealing their identities, scantily clad members of the Parisian demimonde, and well–dressed young men all mingle together.

Manet sketched the scene on site, but painted it over a period of months in his studio. He posed several of his friends—noted writers, artists, and musicians—and even included himself in the crowded scene. He is probably the bearded blond man at right who looks out toward the viewer. At his feet, a fallen dance card bears the painter’s signature.

At the edges of the horizontal painting—a format Manet used often—figures end abruptly. At top, legs dangle over a railing. In contrast to the self–contained compositions of academic art, we are instantly aware that we see only a part of the scene and that it extends beyond the picture frame. 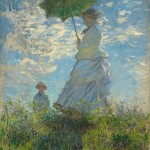 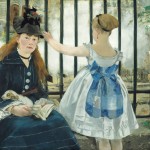