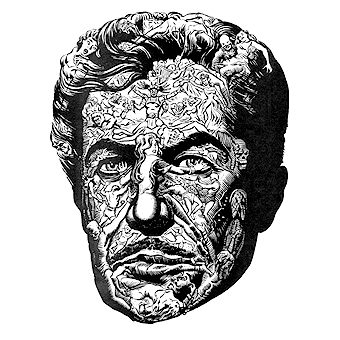 The Masque of the Red Death

He had directed, in great part, the movable embellishments of the seven chambers, upon occasion of this great fete; and it was his own guiding taste which had given character to the masqueraders. Be sure they were grotesque. There were much glare and glitter and piquancy and phantasm–much of what has been seen in “Hernani.” There were arabesque figures with unsuited limbs and appointments. There were delirious fancies such as the madman fashions. There were much of the beautiful, much of the wanton, much of the bizarre, something of the terrible, and not a little of that which might have excited disgust. To and fro in the seven chambers stalked, in fact, a multitude of dreams. And these the dreams–writhed in and about, taking hue from the rooms, and causing the wild music of the orchestra to seem as the echo of their steps. And, anon, there strikes the ebony clock which stands in the hall of the velvet. And then, for a moment, all is still, and all is silent save the voice of the clock. The dreams are stiff-frozen as they stand. But the echoes of the chime die away–they have endured but an instant–and a light half-subdued laughter floats after them as they depart. And now the music swells, and the dreams live, and writhe to and fro more merrily than ever, taking hue from the many-tinted windows through which stream the rays of the tripods. But to the chamber which lies most westwardly of the seven there are now none of the maskers who venture, for the night is waning away; and there flows a ruddier light through the blood-colored panes; and the blackness of the sable drapery appalls; and to him whose foot falls on the sable carpet, there comes from the near clock of ebony a muffled peal more solemnly emphatic than any which reaches _their_ ears who indulge in the more remote gaieties of the other apartments.

But these other apartments were densely crowded, and in them beat feverishly the heart of life. And the revel went whirlingly on, until at length there commenced the sounding of midnight upon the clock. And then the music ceased, as I have told; and the evolutions of the waltzers were quieted; and there was an uneasy cessation of all things as before. But now there were twelve strokes to be sounded by the bell of the clock; and thus it happened, perhaps that more of thought crept, with more of time into the meditations of the thoughtful among those who revelled. And thus too, it happened, that before the last echoes of the last chime had utterly sunk into silence, there were many individuals in the crowd who had found leisure to become aware of the presence of a masked figure which had arrested the attention of no single individual before. And the rumor of this new presence having spread itself whisperingly around, there arose at length from the whole company a buzz, or murmur, of horror, and of disgust.

In an assembly of phantasms such as I have painted, it may well be supposed that no ordinary appearance could have excited such sensation. In truth the masquerade license of the night was nearly unlimited; but the figure in question had out-Heroded Herod, and gone beyond the bounds of even the prince’s indefinite decorum. There are chords in the hearts of the most reckless which cannot be touched without emotion. Even with the utterly lost, to whom life and death are equally jests, there are matters of which no jest can be made. The whole company, indeed, seemed now deeply to feel that in the costume and bearing of the stranger neither wit nor propriety existed. The figure was tall and gaunt, and shrouded from head to foot in the habiliments of the grave. The mask which concealed the visage was made so nearly to resemble the countenance of a stiffened corpse that the closest scrutiny must have difficulty in detecting the cheat. And yet all this might have been endured, if not approved, by the mad revellers around. But the mummer had gone so far as to assume the type of the Red Death. His vesture was dabbled in _blood_–and his broad brow, with all the features of his face, was besprinkled with the scarlet horror.