Giovanni Francesco Barbieri (February 8, 1591 – December 22, 1666), best known as Guercino or Il Guercino, was an Italian Baroque painter and draftsman from the region of Emilia, and active in Rome and Bologna. The vigorous naturalism of his early manner is in contrast to the classical equilibrium of his later works. His many drawings are noted for their luminosity and lively style.

He was born at Cento, a village between Bologna and Ferrara. At an early age he acquired the nickname Guercino (Italian for ‘squinter’) because he was cross-eyed. Mainly self-taught, he was apprenticed at the age of 16 to Benedetto Gennari, a painter of the Bolognese School. By 1615 he had moved to Bologna, where his work gained the praise of an elder Ludovico Carracci. Guercino painted two large canvases, Elijah Fed by Ravens and Samson Seized by Philistines, in what appears to be a stark naturalist Caravaggesque style (although it is unlikely he had been able to see any of the Roman Caravaggios first-hand). They were painted for Cardinal Serra, Papal Legate to Ferrara. 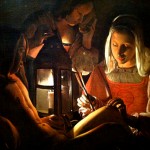