Ginevra de’ Benci’s portrait is two-sided. This is the back, an emblematic portrait of Ginevra. A scroll bears her Latin motto, meaning “Beauty Adorns Virtue.” In the emblem’s center, a sprig of juniper (in Italian, ginepro) suggests Ginevra’s name, while the encircling laurel and palm symbolize her intellectual and moral virtue. The laurel and palm also happened to be the personal emblem of Bernardo Bembo, Venetian ambassador to Florence, whose deep and abiding relationship with Ginevra is revealed in poems dedicated to them. Their platonic friendship was typical of the era and consistent with Ginevra’s elite status as the daughter of a wealthy banker. Infrared examination has revealed Bembo’s motto “Virtue and Honor” beneath Ginevra’s. So it is likely Bembo who ordered the emblematic painting on the verso of the portrait. It is possible, but so far unproven, that he also commissioned the front. 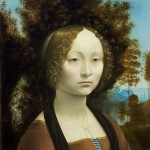