Careful examination of the details embedded in this portrait reveals the key to David’s success as a painter during the time of Louis XVI, Robespierre, and Napoleon: the artist’s ability to transform his subjects into politically powerful icons.

Napoleon is placed in the center of a vertical canvas dressed in his uniform as a colonel of the Foot Grenadiers of the Imperial Guard. His pose—the slightly hunched shoulders and hand inserted into his vest—contrasts to the formality of his costume. In addition, his cuffs are unbuttoned, his leggings wrinkled, and his hair disheveled. David, in a letter to the patron of this portrait, Alexander Douglas, the tenth Duke of Hamilton, explained that his appearance was designed to show that Napoleon had spent the night in his study composing the Napoleonic Code, an impression enforced by details, such as the flickering candles that are almost extinguished, the quill pen and papers scattered on the desk, and the clock on the wall which points to 4:13 a.m.

David strategically placed the sword on the chair to allude to Napoleon’s military success, while the prominent display of the word “Code” in his papers, suggests his administrative achievements. Other decorative details—the heraldic bees and the fleurs–de–lys—are symbols of French absolutism, and imply Napoleon’s power as ruler. 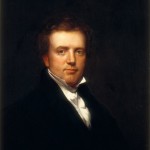 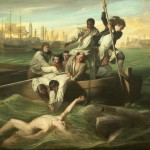