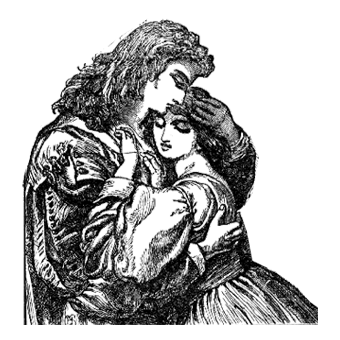 The two chief families in Verona were the rich Capulets and the Montagues. There had been an old quarrel between these families, which was grown to such a height, and so deadly was the enmity between them, that it extended to the remotest kindred, to the followers and retainers of both sides, in so much that a servant of the house of Montague could not meet a servant of the house of Capulet, nor a Capulet encounter with a Montague by chance, but fierce words and sometimes bloodshed ensued; and frequent were the brawls from such accidental meetings, which disturbed the happy quiet of Verona’s streets.

Old Lord Capulet made a great supper, to which many fair ladies and many noble guests were invited. All the admired beauties of Verona were present, and all comers were made welcome if they were not of the house of Montague. At this feast of Capulets, Rosaline, beloved of Romeo, son to the old Lord Montague, was present; and though it was dangerous for a Montague to be seen in this assembly, yet Benvolio, a friend of Romeo, persuaded the young lord to go to this assembly in the disguise of a mask, that he might see his Rosaline, and, seeing her, compare her with some choice beauties of Verona, who (he said) would make him think his swan a crow. Romeo had small faith in Benvolio’s words; nevertheless, for the love of Rosaline, he was persuaded to go. For Romeo was a sincere and passionate lover, and one that lost his sleep for love and fled society to be alone, thinking on Rosaline, who disdained him and never requited his love with the least show of courtesy or affection; and Benvolio wished to cure his friend of this love by showing him diversity of ladies and company. To this feast of Capulets, then, young Romeo, with Benvolio and their friend Mercutio, went masked. Old Capulet bid them welcome and told them that ladies who had their toes unplagued with corns would dance with them. And the old man was light-hearted and merry, and said that he had worn a mask when he was young and could have told a whispering tale in a fair lady’s ear. And they fell to dancing, and Romeo was suddenly struck with the exceeding beauty of a lady who danced there, who seemed to him to teach the torches to burn bright, and her beauty to show by night like a rich jewel worn by a blackamoor; beauty too rich for use, too dear for earth! like a snowy dove trooping with crows (he said), so richly did her beauty and perfections shine above the ladies her companions. While he uttered these praises he was overheard by Tybalt, a nephew of Lord Capulet, who knew him by his voice to be Romeo. And this Tybalt, being of a fiery and passionate temper, could not endure that a Montague should come under cover of a mask, to fleer and scorn (as he said) at their solemnities. And he stormed and raged exceedingly, and would have struck young Romeo dead. But his uncle, the old Lord Capulet, would not suffer him to do any injury at that time, both out of respect to his guests and because Romeo had borne himself like a gentleman and all tongues in Verona bragged of him to be a virtuous and well-governed youth. Tybalt, forced to be patient against his will, restrained himself, but swore that this vile Montague should at another time dearly pay for his intrusion.

The dancing being done, Romeo watched the place where the lady stood; and under favor of his masking habit, which might seem to excuse in part the liberty, he presumed in the gentlest manner to take her by the hand, calling it a shrine, which if he profaned by touching it, he was a blushing pilgrim and would kiss it for atonement.

“Good pilgrim,” answered the lady, “your devotion shows by far too mannerly and too courtly. Saints have hands which pilgrims may touch but kiss not.”

“Have not saints lips, and pilgrims, too?” said Romeo.

“Aye,” said the lady, “lips which they must use in prayer.”