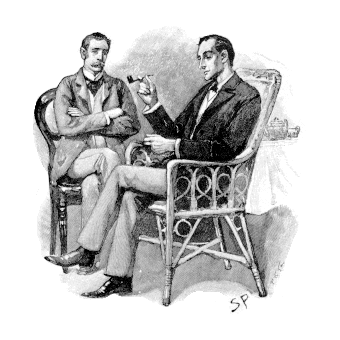 The Adventure Of Charles Augustus Milverton

It is years since the incidents of which I speak took place, and yet it is with diffidence that I allude to them. For a long time, even with the utmost discretion and reticence, it would have been impossible to make the facts public, but now the principal person concerned is beyond the reach of human law, and with due suppression the story may be told in such fashion as to injure no one. It records an absolutely unique experience in the career both of Mr. Sherlock Holmes and of myself. The reader will excuse me if I conceal the date or any other fact by which he might trace the actual occurrence.

We had been out for one of our evening rambles, Holmes and I, and had returned about six o’clock on a cold, frosty winter’s evening. As Holmes turned up the lamp the light fell upon a card on the table. He glanced at it, and then, with an ejaculation of disgust, threw it on the floor. I picked it up and read:

“Who is he?” I asked. “The worst man in London,” Holmes answered, as he sat down and stretched his legs before the fire. “Is anything on the back of the card?”

I turned it over.

“Hum! He’s about due. Do you feel a creeping, shrinking sensation, Watson, when you stand before the serpents in the Zoo, and see the slithery, gliding, venomous creatures, with their deadly eyes and wicked, flattened faces? Well, that’s how Milverton impresses me. I’ve had to do with fifty murderers in my career, but the worst of them never gave me the repulsion which I have for this fellow. And yet I can’t get out of doing business with him — indeed, he is here at my invitation.”

“I’ll tell you, Watson. He is the king of all the blackmailers. Heaven help the man, and still more the woman, whose secret and reputation come into the power of Milverton! With a smiling face and a heart of marble, he will squeeze and squeeze until he has drained them dry. The fellow is a genius in his way, and would have made his mark in some more savoury trade. His method is as follows: He allows it to be known that he is prepared to pay very high sums for letters which compromise people of wealth and position. He receives these wares not only from treacherous valets or maids, but frequently from genteel ruffians, who have gained the confidence and affection of trusting women. He deals with no niggard hand. I happen to know that he paid seven hundred pounds to a footman for a note two lines in length, and that the ruin of a noble family was the result. Everything which is in the market goes to Milverton, and there are hundreds in this great city who turn white at his name. No one knows where his grip may fall, for he is far too rich and far too cunning to work from hand to mouth. He will hold a card back for years in order to play it at the moment when the stake is best worth winning. I have said that he is the worst man in London, and I would ask you how could one compare the ruffian, who in hot blood bludgeons his mate, with this man, who methodically and at his leisure tortures the soul and wrings the nerves in order to add to his already swollen money-bags?”

I had seldom heard my friend speak with such intensity of feeling.

“But surely,” said I, “the fellow must be within the grasp of the law?”

“Technically, no doubt, but practically not. What would it profit a woman, for example, to get him a few months’ imprisonment if her own ruin must immediately follow? His victims dare not hit back. If ever he blackmailed an innocent person, then indeed we should have him, but he is as cunning as the Evil One. No, no, we must find other ways to fight him.”

“Because an illustrious client has placed her piteous case in my hands. It is the Lady Eva Blackwell, the most beautiful debutante of last season. She is to be married in a fortnight to the Earl of Dovercourt. This fiend has several imprudent letters — imprudent, Watson, nothing worse — which were written to an impecunious young squire in the country. They would suffice to break off the match. Milverton will send the letters to the Earl unless a large sum of money is paid him. I have been commissioned to meet him, and — to make the best terms I can.”