Although his career was brief, lasting a mere 10 years, Vincent van Gogh proved to be an exceptionally prolific and innovative artist. While he experimented with a variety of subjects—landscape, still life, portraiture—it is his self–portraits that have come to define him as an artist. Like his predecessor, Rembrandt van Rijn, Van Gogh was a devoted and probing practitioner of the art of self–portraiture. He painted no fewer than 36 self–portraits, undertaking his first forays just after his arrival in Paris in March 1886 and executing his last, culminant works during his stay at the asylum of Saint–Paul–de–Mausole in Saint–Rémy. The Washington canvas is one of the very last self–portraits Van Gogh painted.

This self–portrait is a particularly bold painting, apparently executed in a single sitting without later retouching. Here Van Gogh portrayed himself at work, dressed in his artist’s smock with his palette and brushes in hand, a guise he had already adopted in two earlier self–portraits. While the pose itself and the intense scrutiny of the artist’s gaze are hardly unique—one need but think of the occasionally uncompromising self–portraits of Rembrandt—the haunting and haunted quality of the image is distinct. The dark blue–violet of the smock and ground, the vivid orange of his hair and beard, create a startling contrast to the yellow and green of his face and heighten the gauntness of his features in a sallow complexion. The dynamic, even frenzied brushwork lends an uncommon immediacy and expressiveness to his portrayal. In its sheer intensity, it stands in sharp contrast to the other self–portrait he painted at the same time (Musée d’Orsay, Paris) in which the artist appears calmer and more self–possessed. Nevertheless, Van Gogh preferred the Washington painting as the one that captured his “true character.” 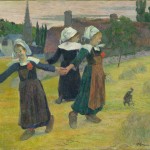