Rembrandt van Rijn painted, drew, and etched so many self–portraits in his lifetime that changes in his appearance tempt us to gauge his mental state by comparing one image to another. Rembrandt painted this self–portrait in 1659, after he had suffered financial bankruptcy that forced him to sell his home and other possessions to satisfy his creditors. Early descriptions of the painting therefore mentioned an aura of melancholy surrounding the artist, yet the removal of dark, discolored varnish in 1992 proved that interpreting paintings on the basis of an artist’s chronological life story is dangerous: the cleaned portrait revealed a rich range of pinks and bright flesh tones, forcing a reassessment of Rembrandt’s “mood.” Instead of sadness, the deep–set eyes that bore into those of the viewer seem to express inner strength and dignity.

The light that so effectively illuminates the head also accents Rembrandt’s left shoulder and, to a lesser extent, his broadly executed clasped hands. Rembrandt’s pose was inspired by Raphael’s famous Portrait of Baldessare Castiglione, 1514–1515 (Louvre, Paris) which had appeared in an auction in Amsterdam in 1639, at which time Rembrandt had made a sketch of it. Twenty years later Rembrandt followed Raphael’s prototype for the pose, costume, and expression to present himself as a learned painter. 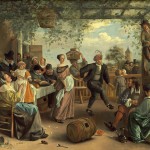 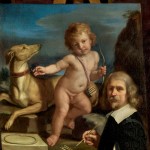