According to the tenets of the 17th–century Catholic church, Mary Magdalen was an example of the repentant sinner and consequently a symbol of the Sacrament of Penance. According to legend, Mary led a dissolute life until her sister Martha persuaded her to listen to Jesus Christ. She became one of Christ’s most devoted followers and he absolved her of her former sins.

In Georges de La Tour’s somber canvas Mary is shown in profile seated at a table. A candle is the source of light in the composition, but the light also carries a spiritual meaning as it casts a golden glow on the saint’s face and the objects assembled on the table. The candle light silhouettes Mary’s left hand which rests on a skull that is placed on a book. The skull is reflected in a mirror. The skull and mirror are emblems of vanitas, implying the transience of life.

The simplification of forms, reduced palette, and attention to details evoke a haunting silence that is unique to La Tour’s work. La Tour’s intense naturalism rendered religious allegory accessible to every viewer. Although his work is deeply spiritual in tone, the solidity and massing of the forms reveal the same emphasis on clarity and symmetry that pervaded contemporary history painting and was a hallmark of French baroque art. 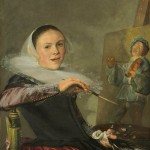