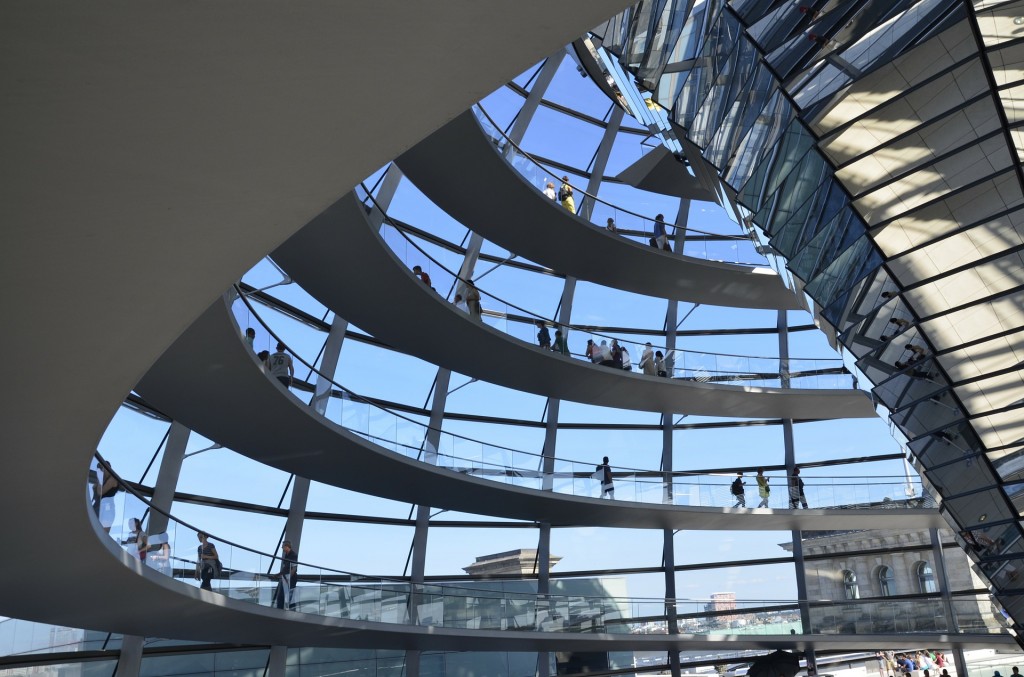 The Reichstag dome is a large glass dome with a 360 degree view of the surrounding Berlin cityscape. The debating chamber of the Bundestag, the German parliament, can be seen down below. A mirrored cone…

The Reichstag dome is a large glass dome with a 360 degree view of the surrounding Berlin cityscape. The debating chamber of the Bundestag, the German parliament, can be seen down below. A mirrored cone in the center of the dome directs sunlight into the building, and so that visitors can see the working of the chamber.

The dome is open to the public and can be reached by climbing two steel, spiraling ramps that are reminiscent of a double-helix. The Dome symbolizes that the people are above the government, as was not the case during National Socialism.

The glass dome was also designed by Foster to be environmentally friendly. Energy efficient features involving the use of the daylight shining through the mirrored cone were applied, effectively decreasing the carbon emissions of the building. The futuristic and transparent design of the Reichstag dome makes it a unique landmark, and symbolizes Berlin’s attempt to move away from a past of Nazism and instead towards a future with a heavier emphasis on a united Germany.

With the reunification of Germany and the decision to move the capital from Bonn back to Berlin, it was also decided that the original Reichstag building be rebuilt along with a new dome that emphasized a unified Germany. Architect Norman Foster won a commission to design and rebuild the Reichstag in 1993. Foster originally wanted a parasol-esque building, not a dome, but his original design was rejected, partly due to the unrealistic costs.

The design of the dome was at first controversial, but has become accepted as one of Berlin’s most important landmarks. It derives from a design by Gottfried Böhm, who had previously suggested a cupola of glass with visitors walking on spiral ways to the top in 1988. His design was added to the information of the competition in 1992, which was won by Foster. Later the Bundestag decided that a cupola had to be built and Foster consequently gave up his resistance against it. Foster reused the idea of a spiral walkway within a conical structure for his design for City Hall in London some years later.

The dome was constructed by Waagner-Biro.